When the cancer is in remission, we say, “God is good.” When the pay raise comes, we announce “God is good.” When the university admits us or the final score favors our team, “God is good.” Would we, and do we, say the same under different circumstances? In the cemetery, as well as the nursery? In the unemployment line, as well as the grocery line? In days of recession as much as in days of provision?
Is God always good?
For Brian and Christyn Taylor, the question is more than academic. During this last year their seven-year-old daughter was hospitalized for more than six months with six surgeries for a disease of the pancreas, Brian’s job was discontinued, several family members died and another was diagnosed with brain cancer, and Christyn was pregnant with child number four. Life was tough. She blogged:
Multiple hospital stays with my daughter were exhausting, but I held faith. Losing Brian’s family members one by one until there was only one left, who was then diagnosed with stage 4 brain cancer, was incomprehensible, but I still held faith. Being hospitalized seven-and-a-half weeks with a placental abruption was terrifying, but I held faith. I held to the faith that God works for my good, and though I did not necessarily understand the trials, I trusted God’s bigger, unseen plan.
God and I had a deal- I would endure the trials that came my way as long as he acknowledged
my stopping point.  He knew where my line had been drawn, and I knew in my
heart he would never cross it. He did.
I delivered a stillborn baby girl. With my daughter Rebecca still at home on a feeding tube and her future health completely unknown, it was a foregone conclusion that this baby we so wanted and loved would be saved. She wasn't. My line in the sand was crossed.
My one-way deal with God was shattered.
Everything changed in that moment. Fear set in, and my faith began to crumble. My “safety zone” with God was no longer safe. If this could happen in the midst of our greatest struggles, then anything was fair game. For the first time in my life, anxiety began to overwhelm me.
We can relate. Most, if not all of us, have a contractual agreement with God. The fact that he hasn't signed it doesn't keep us from believing it.
I pledge to be a good, decent person, and in return God will…
save my child
heal my wife
protect my job
(fill in the blank)__________
only fair, right? Yet when God fails to meet our bottom-line expectations, we are left spinning in a tornado of questions. Is he good at all? Is God angry at me? Stumped? Overworked? Is his power limited? His authority restricted? Did the devil outwit him? When life isn't good, what are we to think about our God? Where is he in all this? He's there!... I'll answer this in detail in part 2.
Excerpt from Max Lucado's Book "You'll get through this"

Posted by Caitlin Narwold at 10:43 PM

I love to hear comments!!! Please drop me a message!

Newer Post Older Post Home
Subscribe to: Post Comments (Atom)
~But those who wait on the Lord shall renew their strength; They shall mount up with wings like eagles, they shall run and not be weary, they shall walk and not faint. ~Isaiah 40:31 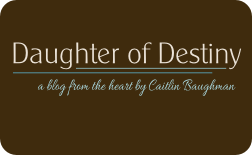 ~1st Peter 5:6-11~
Humble yourselves, therefore, under the mighty hand of God so that at the proper time he may exalt you. Casting all your anxieties on him, because he cares for you. Be sober-minded; be watchful. Your adversary the devil prowls around like a roaring lion, seeking someone to devour. Resist him, firm in your faith, knowing that the same kinds of suffering are being experienced by your brotherhood through the world. And after you have suffered a little while, the God of all grace, who has called you to his eternal glory in Christ, will himself restore, confirm, strengthen, and establish you. To him be the dominion forever and ever. Amen